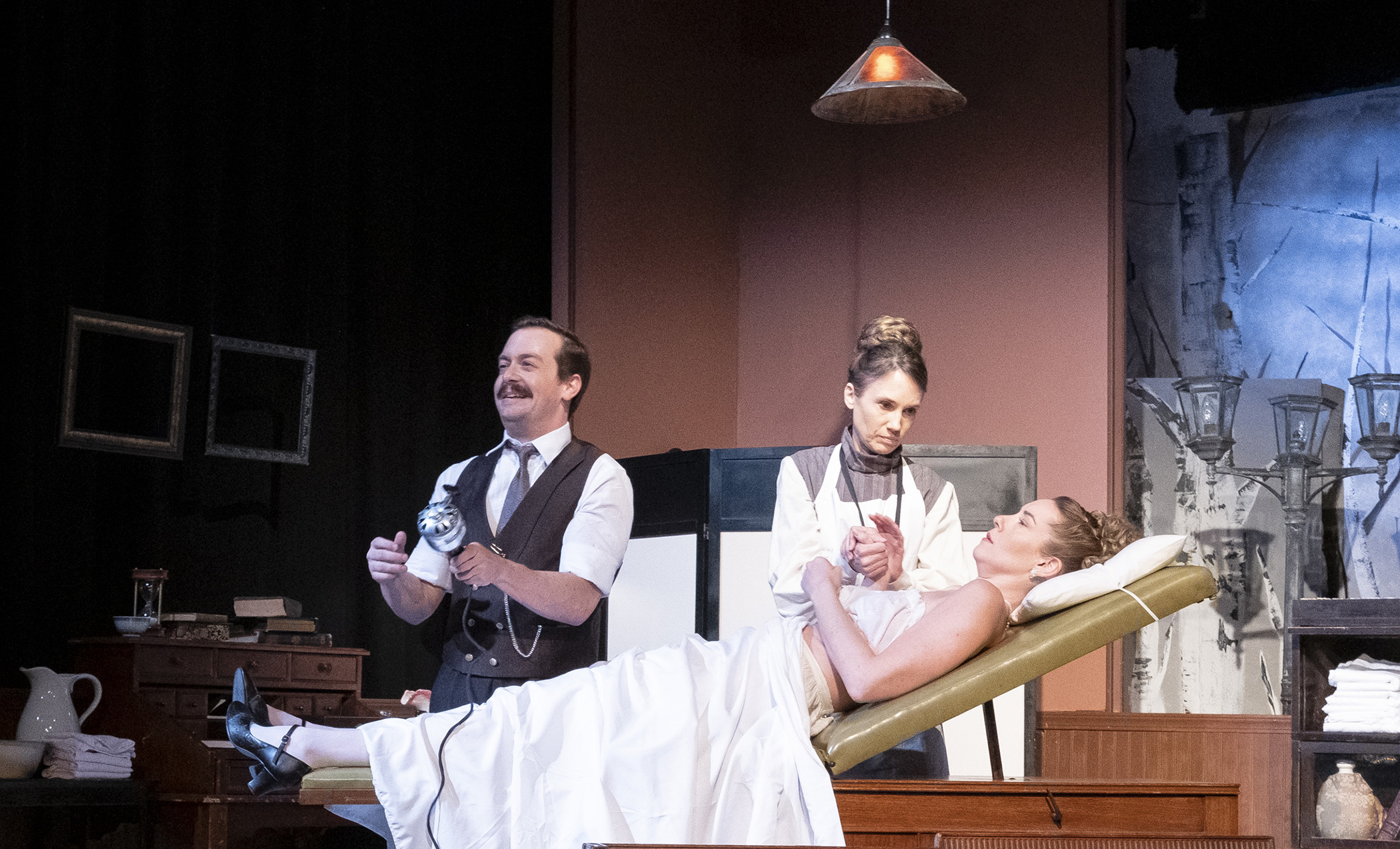 Set in the 1880s, the action takes place in upstate New York in the home and clinic of Dr. Givings (Spencer Cantrell), a physician who has taken advantage of the relatively new miracle of electricity to treat female patients who suffer from the ill-defined malady, “hysteria.” In his surgery, the good doctor, assisted by his stoic assistant, Annie (Jennifer Zorbalas), uses the newly invented electric vibrator to stimulate the reproductive organs, which produces quite a response in his patient, Mrs. Daldry (Stephanie Crothers). Her moans of ecstasy can be clearly heard in the adjacent room by his wife, Catherine (Dionna Veremis), a deeply unhappy woman, whose inability to nurse her new born child makes her desperate. To save the child, Elizabeth (Monazia Smith), a woman who recently lost her new born, is engaged as a wet nurse. The good doctor seems to have little regard for his wife’s predicament and repeatedly flees to spend time at “the club.”

Mrs. Daldry’s husband, Mr. Daldry, played by Christopher Carver (3/17-4/3) and Alexander Wells (4/8-4/23), the avatar of male obliviousness, is usually turned out of the house to stroll the garden as his wife undergoes treatment.

The second act ratchets up the action with the exuberant entrance of Leo Irving (the excellent Bryan Robert Bertone), a continental artist who seeks out the doctor’s treatment for his ennui. The doctor proposes giving the artist the benefit of his method. He modifies the treatment by using the rear entrance, which stimulates the prostate and invigorates the artist, who flirts with the married women, resumes painting and persuades Elizabeth to serve as his model.

Directed by Lane Allison, the action is brisk, save for a slow down deep in the second act of the nearly three-hour performance, when the intimacy of the dialog made it hard to hear. But the scene leading up to the climax and dénouement is startling and richly rewarding. It really is something to see.

Jan Munroe’s scenic design is detailed and terrific, a feast for the eyes, with lighting by Sarah Schwartz; sound by Marc Antonio Pritchett; props by Bruce Dickinson and Ina Shumaker; and costumes by Mylette Nora. The stage is flawlessly managed by Jennifer Palumbo. The whole shebang is produced by Artistic Director Martha Demson.