The power of the theatre to bring attention to the injustices of the world is remarkable. Over and over, theatre artists and writers expose social sins and spotlight issues that the collective conscience often prefers to remain unacknowledged. Academy Award winner Dustin Lance Black (screenplay Milk) put heat on the California proposition that banned same sex marriage with his play 8, which opened in New York, was broadcast world-wide and then given staged readings all over the country. Luis Valdez exposed the judicial chicanery that put over twenty young Mexican-American pachucos on trial and then to prison for a murder they didn’t commit in his classic Zoot Suit. And now writer/director Robert Allan Ackerman has created and staged Blood, an extravaganza shoehorned into the forty-seven-seat Ruby Theatre at The Complex in Hollywood.

With drama, comedy, song and dance, Blood tells the story of a scandal that ripped open a heinous crime that occurred in Japan in the 1980s. In collusion with an American supplier, the Japanese Health Ministry allow a contaminated blood supply to be used in transfusions on patients, many of them hemophiliacs, who subsequently developed AIDS and died of the incurable disease. This venality was caused by greed on the part of corporations, health ministers and doctors. It was also fueled by Japanese pride and xenophobia. It was given out that, because of their genetic superiority, the Japanese people were immune to the virus, so many of the victims’ death certificates were falsified. Meanwhile, as many as two thousand people died, some of them children. Crusading journalists and lawyers brought suit and, after many years, formal apologies were made, as well as some restitution. A token few culprits went to jail.

The story is told in episodic fashion, focusing on a few key individuals, interspersed with some questionable songs, some broadly comic chorus numbers and iconic Japanese cultural references. The characters are fictional, but based on real people and real events. An American reporter, Jules Davis (Alexa Hamilton), teams up with Korean-Japanese lawyer Yoji Kurasawa (Sohee Park), “a composite of several dedicated attorneys.” Together they must overcome cultural prejudices and traditions to achieve justice, a process that took years. They must enlist the help of some very reluctant victims and witnesses, most especially hospital nurse Eiko Asami (Kazuma Aiharra), who fears for her job and future. 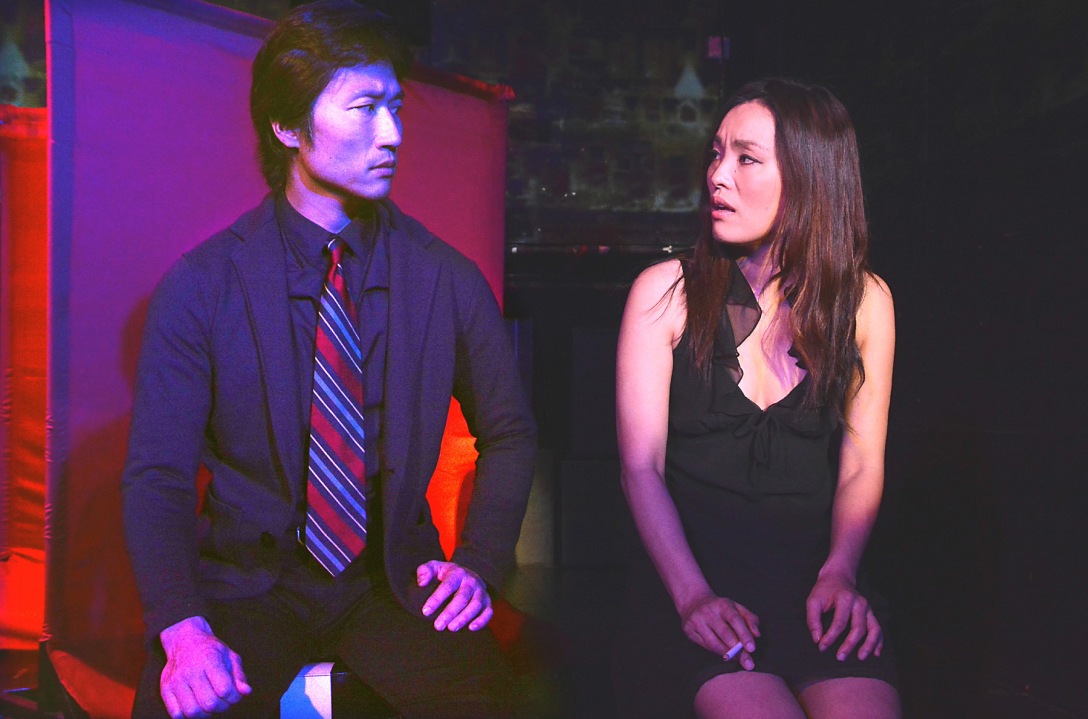 After an uninspired opening, the show gathers steam. The enthusiastic ensemble (Takuma Anzai, Ash Ashina, Anthony Gros, Takaaki Hirakawa, Michael Joseph, Saki Miata, Andrew Nakajima, Daryl L. Padilla, Mika Santoh, Taishin Takibayashi) and doubling principals move screens and props, then sing and dance to the hard driving music of Nick Ackerman and Chris Cester, who borrow a bit of Gilbert and Sullivan for some high camp hilarity. Bowler-hatted, swallow-tail-coated Ministers march around in mincing penguin steps singing, “if you want to know who we are,” to the tune of The Mikado’s opening number. Harmoniously sung and enthusiastically performed, they are terrific. One scene is performed in the hyper-exaggerated style of Kabuki speech that was very funny and perhaps demeaning. The action is sometimes punctuated with Kabuki clappers to indicate the start of scenes and the sound of iconic Taiko drums often thunder in the background.

The true emotional heart of Blood shows up in the second act with the introduction of Koyo (passionate, affecting Miho Ando), a boy of ten suffering under the AIDS virus. This character is based on a real boy, Ryuhei Kawada, who joined the fight against the government and pharmaceutical companies. A high point in the show comes in the number “Hail the Child Warrior,” when the chorus marches with the boy held high on shoulders wearing a theatrical version of Japanese armor. This heroic boy did not die. Instead, as a nineteen-year-old, he broke the silence of shame surrounding the disease by revealing his name so as to fully fight against the government. Today, he serves as a member of the Japanese Parliament.

A show like this needs a villain and it comes in the form of Dr. Kazama, deliciously played by Toshi Toda who growls out his lines with arrogant distain and despicable hauteur. The character is based on the real-life doctor who, with sad irony, was the head of the AIDS Research Committee and President of the Hemophilia Society.

Like “a great reckoning in a little room,” Blood is a big story, with a big cast in an intimate space. It is a little rough around the edges and a bit raw, but it achieves an unquestionable power. Blood is produced by The Garage and runs through April 3 at The Complex, 6476 Santa Monica Blvd., Hollywood.