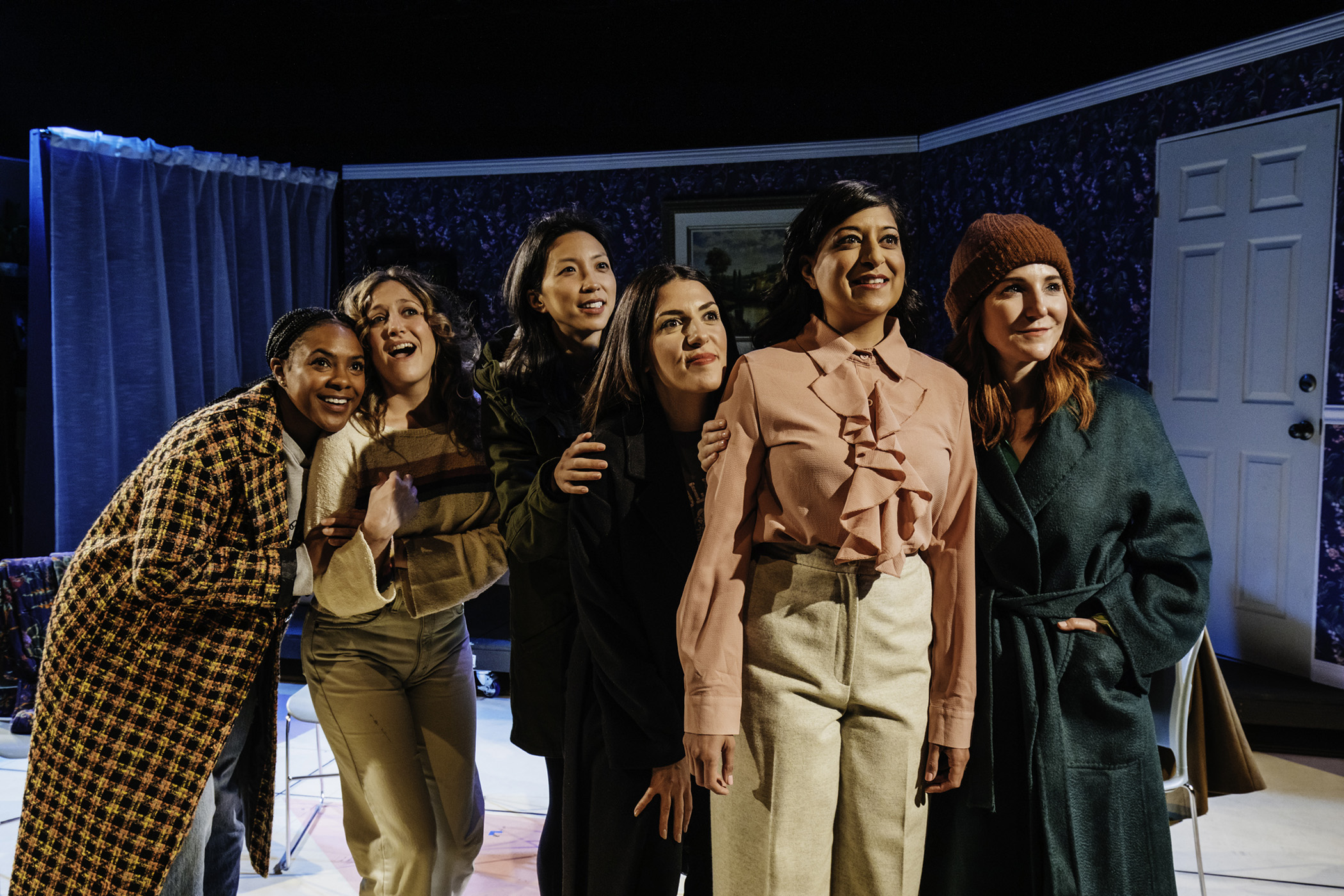 The press release for Untitled Baby Play, written by Nina Braddock and now playing by IAMA Theatre Company at Atwater Village Theatre, is a coy title for a blockbuster of a show. Six extraordinary female actors dominate the stage, each with memorable, outstanding performances united around the universal theme of child birth, and all that goes with it, planned or unplanned.

The six women have long been friends, some as far back as grade school. Their mutual friend, Libby, is due to have a baby and Penny (Sonal Shah) a high powered go-to kind of gal, has taken it upon herself to organize a baby shower. She incessantly communicates with her friends via smart phone. Meredith (Laila Ayad) who has a job that demands much travel, disagrees with with Penny’s plans that are elaborate in the extreme. Eden (Sarah Utterback) is devoted to physical training, and Gillian (Courtney Sauls), is teaching second graders. Natalia (Anna Rose Hopkins) is a budding actor and Clara (Jenny Soo) wrestles with the chaos of a new born infant. They mostly go along with Penny.

This complex script vividly exposes the fears and yearnings, the joys, and yes, the sorrows that every woman contends with and no man, no matter how loving and devoted, can truly understand.

There is plenty of humor and relatively lighthearted conflict in the first act. The second act sails into troubled emotional waters. It begins with a curtain raiser. After taking a short stroll to the street and back, the audience comes back inside to be greeted with a hastily erected “red curtain” and an astounding solo performance by Anna Rose Hopkins. Her character has created a last ditch effort to gain traction in show biz. This is thrilling theatre of the highest order.

The curtain is struck to reveal a nicely appointed bathroom complete with a tub and toilet. The baby shower is finally up and going and the action can be heard off stage. Each character eventually spends time in the bathroom alone or with others. Most make use of the toilet for one purpose or another. Comedy is left behind and this is where the emotional hammer comes down and why this theatre goer was forced to his feet at curtain call to applaud loud and long.

Performances run through June 27 on Fridays, Saturdays, and Mondays at 8 pm (dark May 30) and Sundays at 3 pm at Atwater Village Theatre 3269 Casitas Ave. Los Angeles, CA 90039

FREE parking in the ATX (Atwater Crossing) lot one block south of the theater.