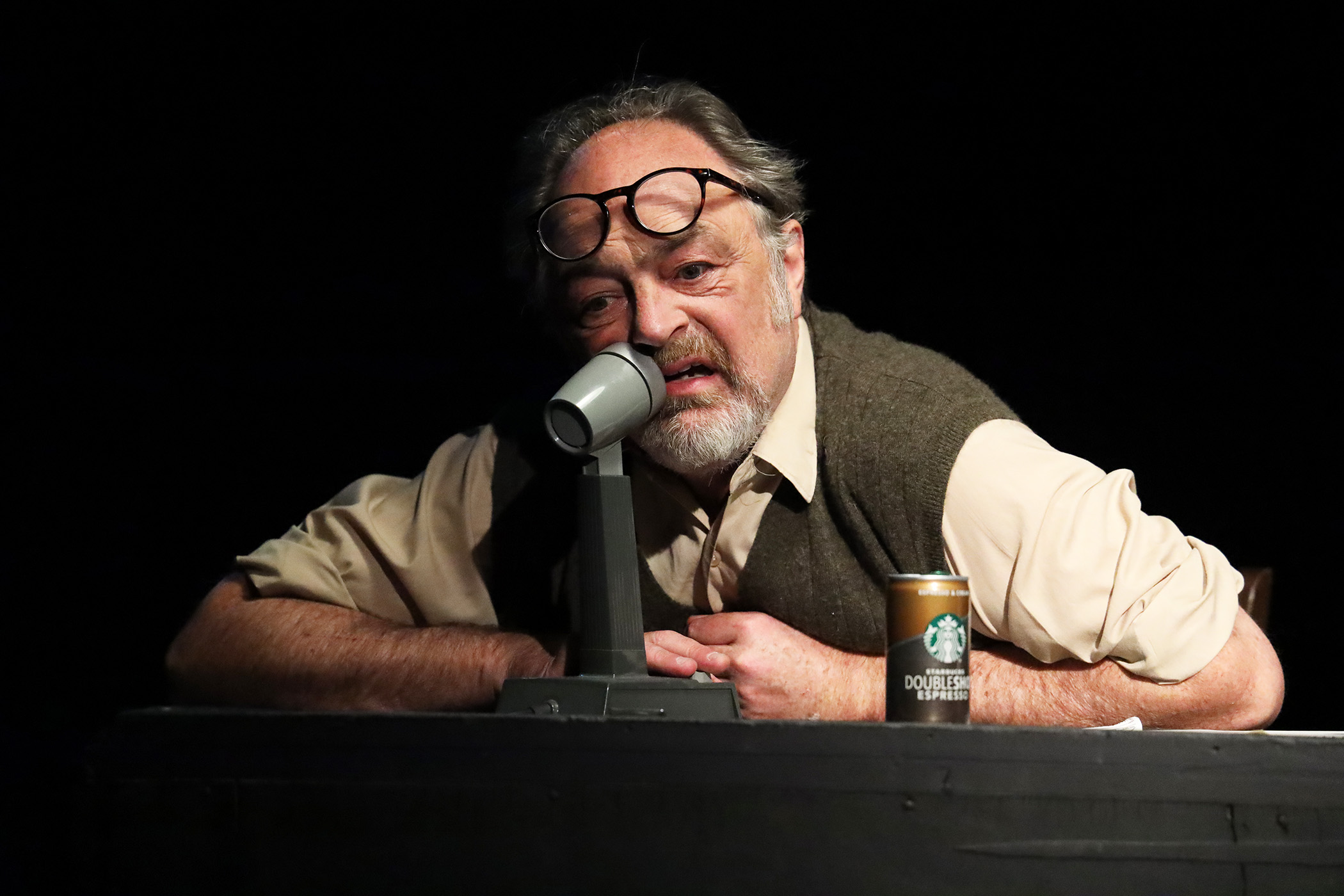 After writing reviews and op-eds in the Greater Bay Area, my wife and I decamped to Greater Los Angeles to be closer to our kids. I soon discovered the amazing amount of excellent theatre here from the tiniest venue at the Hudson to the Pantages and the Ahmanson. Among the very best is the extraordinary Odyssey Theatre Ensemble. The first show I saw there was Awake and Sing back in September of 2015.* It knocked me out then and I have returned again and again ever since.

The latest production at Odyssey is Wakings, directed by Artistic Director Ron Sossi. The show consists of four short pieces, written by Robert Coover, Hermann Hesse, and Harold Pinter, that deal with the human mind and consciousness. The pieces are humorous, serious, touching and inspiring.

The first is Pinter’s Victoria Station. Late at night a London taxi dispatcher (the inimitable Ron Bottitta) is trying to spur a driver to go to Victoria Station to pick up an important person. The driver (C. J. O’Toole) is kind of air-headed, amiable and slow to respond. The situation is sort of cartoon-like and one can almost visualized steam coming out of ears the dispatcher à la Looney Tunes. What is odd, the driver doesn’t seem to know anything about Victoria station and instead mentions the Crystal Palace. Hmmm…

Next up is Robert Coover’s Rip Awake, featuring Darrell Larson as a grumpy, pissed-off Rip Van Winkle, who, understandably, resents his situation and bares extreme animosity for those Dutch bowlers that did him in. Mr. Larson roams the entire stage addressing the audience with his multiple grievances. He shot his dog by mistake and took it home and ate it. He hates that his musket has rusted. He is often humorous, but soon basks in anger, woe and misfortune. Larson’s solo performance is superb.

Kristina Ladegaard and Diana Cignoni in “A Kind of Alaska.” Photo by Josh La Cour

At intermission, the audience is asked to leave the theatre so that the stage can undergo a rather large set change. Upon re-entering, there now is a lovely woman (Diana Cignoni) downstage right lying in a hospital bed asleep or, perhaps, dead or comatose. A doctor (Ron Bottitta) sits close by. After the audience is seated and house lights dim, the woman stirs, becomes conscious, and soon takes on the manners of a teenager. The doctor is extraordinarily gentle. This is unknown territory; he is walking on eggs. The woman is visited by her sister (Kristina Ladegaard), who has brought flowers. The two try to ease the woman into her current reality. I found the scene very touching and more than a little sad.

The entire cast comes on stage for the final vignette with C. J. O’Toole taking on the role of Siddhartha while Ron Bottitta, Darrell Larson, Diana Cignoni, and Kristina Ladegaard give readings from Hermann Hesse’s Siddhartha. Siddhartha is escorted upstage by the women who is given a cleansing wash behind a shadow screen. He re-enters cleansed, walks downstage and rewards the audience with the beatific smile of the Buddha.

This production is unusual, heartfelt theatre of the highest rank.