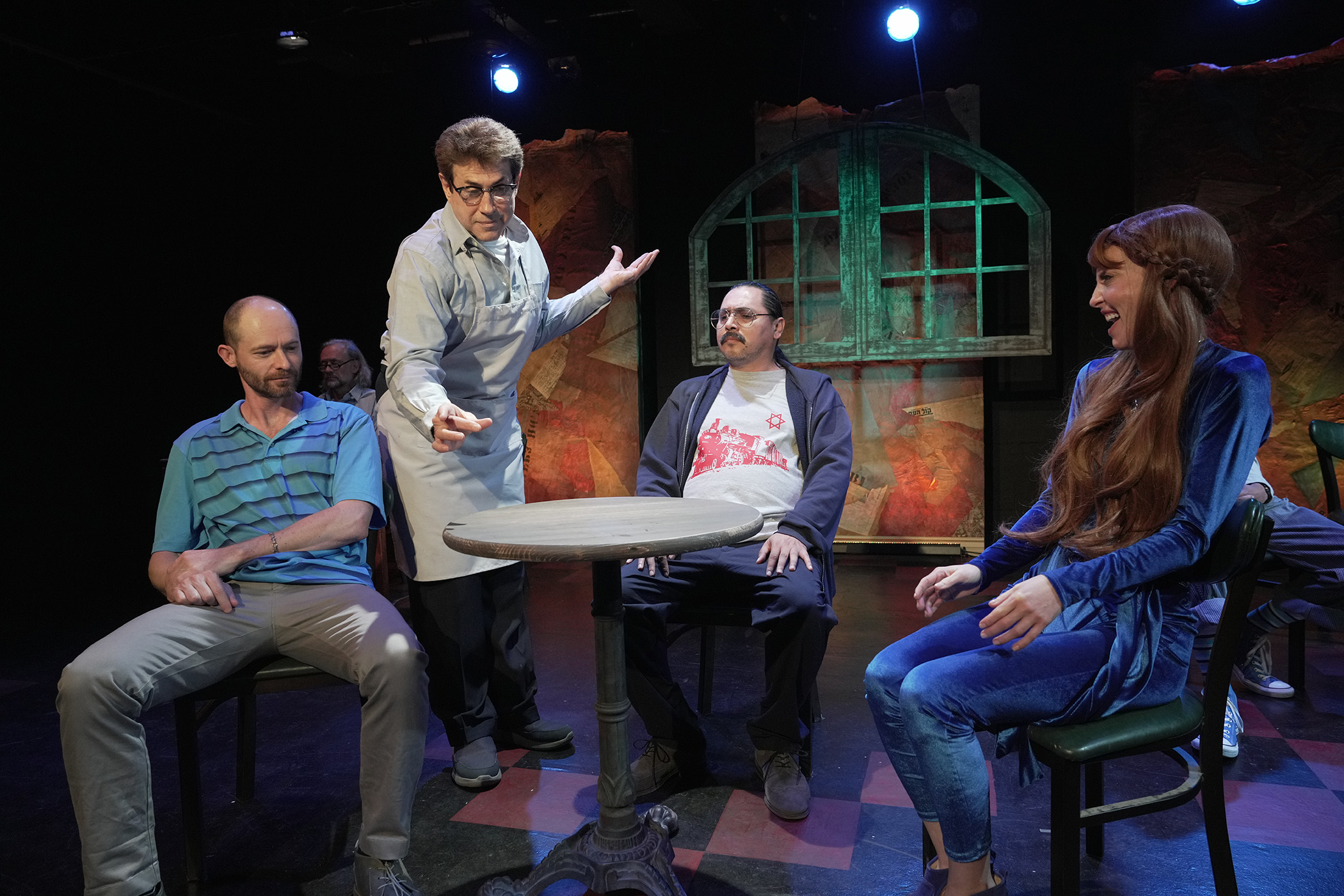 Murray Mednick is a prolific, award winning playwright well known locally for his Gary Plays and other works. His latest play, Three Tables, which is written and directed by the playwright, is quite unusual, to say the least. Presented at the intimate Zephyr Theatre, Three Tables boasts a cast of eight actors who mostly sit at the three tables of the title.The play opens in a small restaurant, which is spare with two elderly Jewish men, a server (John Fanstasia) and a cook (Richard Sabine), who sit at a rectangular table upstage right, and two men and a woman who are downstage center at a small round table. The third table is empty. Throughout the play the bodies and gazes of the players are mostly directed out toward the audience.

The center group are actors who are rehearsing a scene. Corey Rieger seems to be the leader. Michael Uribes, center, is agitated and anxious, with his legs in a nervous bouncing up and down movement like a teenager. Laura Liguori sits left with legs crossed and dressed in a skin-tight, blue jumpsuit. She seems bored and aloof. She takes the lead with the idea of throwing a woman down a well. The Jewish men are utterly disdainful of the center group and reminisce about the Holocaust, refering to it as the Shoah.

Three actors, two men (Dennis Renard and Eric Stanton Betts), and a woman (Raquel Cain) enter upstage left partway through the one-act play. They take seats at the last table and mostly look out toward the audience as well when they speak. Dennis Renard wears rolled up bib overalls and a brimmed hat. He sings sometimes accompanied by music. Eric Stanton Betts sits center. He is young and seems unsure. Raquel Cain is much older and speaks of existential angst.

What does it all mean? Ah…there’s the rub. There is nothing really concrete going on. The action is nebulous. And maybe that is the intention. One can certainly understand the increasing despair, the floundering and dystopia of modern times. One does leave the theatre thinking.

The production is sparse and pretty darn good. I loved the upstage panels, window, and the blue entry up right; and the sound, the lights and the costumes. Kudos to Joel Daavid, scenic designer; Azra King-Abadi, lighting designer; John Zalewski, sound and original music; and the costumes by Shon LeBlanc. The stage is expertly managed by Jenine MacDonald.

Three Tables is produced by Racquel Lehrman, Theatre Planners, and presented by Padua Playwrights. It continues Fridays at 8pm on May 13 and May 20; on Saturdays at 8pm on May 14 and May 21; and on Sundays at 3 pm May 15 and May 22 at Zephyr Theatre, 7456 Melrose Ave., Los Angeles CA 90046